The world's largest radio telescope will be completed in late 2013

ALMA’s 66 antennas located in Chile, will be fully installed next. Most longer works 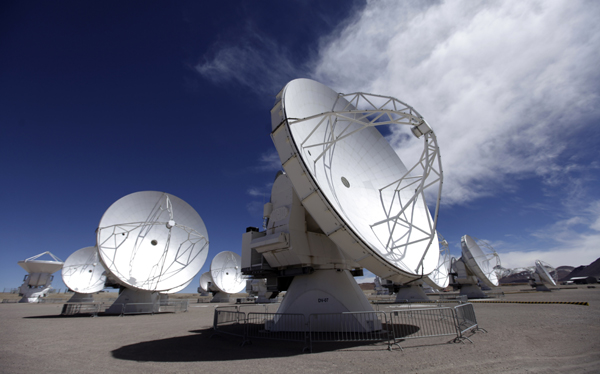 In total, ALMA will have 66 operational antennas. Here are some of them. Nearly 50 are working at this time.

The observatory ALMA, the largest astronomical project in the world, located in northern Chile, will be fully operational by the end of next year, when the 66 antennas installed as planned, reported the Italian astronomer Gianni Marconi organization. Over a year ago ALMA (Atacama Large Millimeter / submillimeter Array, for its acronym in English), and science operations began, in a few weeks, will operate a total of fifty antennas.

The observatory, which was begun in 2005 and is the most powerful in the world and has the peculiarity that their antennas do not work individually, but as a large telescope. “Each one (of antennas) receives the signal and all this comes together in a great sign. This is called interferometry, “said Valeria Foncea, ALMA communications chief, in a ceremony before reporters in Santiago.

When everything is finished there will be twelve antennas 54 meters in diameter and twelve of seven meters. “Because you can not build a telescope of 16 kilometers in diameter, then generate 66 antennas spread. Technically it is impossible to keep growing, “he added.

The observatory is located at 5,000 meters above sea level in the Atacama Desert, in the Llano de Chajnantor, in “kunza” the language of the ancient Atacama, meaning “place of departure”. “It is next to the desert and over the atmosphere by dryness. If moisture signal is distorted, “said Foncea.

According Gianni Marconi, ALMA will investigate cosmic history of the universe, to know what is the “Big Bang” will help us understand the formation of planetary systems are born and how stars evolve, and the formation and interaction of galaxies, among other things . This project will bring together twenty countries, from America, Europe and Asia, and have invested $ 1,500 million. The official opening is scheduled for mid-March.