SWIPP, the social network that seeks to know what people think about anything

SWIPP, the social network that seeks to know what people think about anything 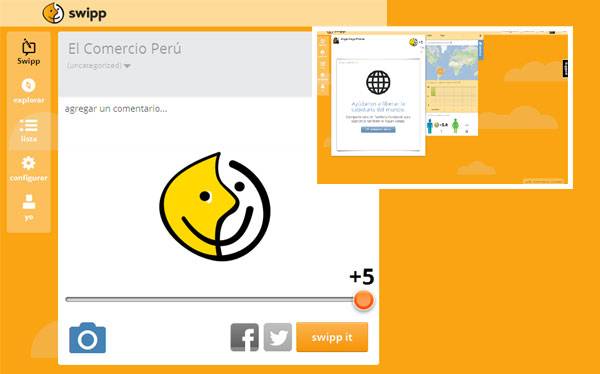 The ambitious proposal is SWIPP global democratic tool that goes beyond the “trending topics” and the number of followers on Twitter and Facebook, systems commonly used to determine the importance or fame for something or someone.

“We want to collect and show what everyone thinks about any topic imaginable,” he told EFE responsible for international marketing and communication SWIPP, Frederik Hermann.

THE DYNAMICS OF TWITTER AND DENSITY OF WIKIPEDIA This social network which aims to buoyant density of Twitter and Wikipedia, was forged during the past year and a half with the work of 15 people in Mountain View, in the Silicon Valley California, near the headquarters of Google, convinced that can become the next Internet revolution.

“We aim to reach 200,000 users in the short term and perhaps a million in a year,” said Hermann on the social network that is available in 5 languages (including Spanish) and has native iPhone application and is freely available to the only requirement to have an account on Facebook.

Once registered, the user will find a menu that will be invited to publish their first “SWIPP”, name given to this ‘tweet’ the creators of the platform, which must indicate the subject of the message content, the would become the “hashtag” on Twitter, and you can add a comment.

THE SCORE IS THE KEY SWIPP starts with over 10 million registered concepts and 4 million photos on its servers, but users may propose new items on “products, people, places and things,” said Hermann.

What’s different here is that in addition to expressing an opinion you can rate the degree of agreement or disagreement with the matter, for which voting enables a bar that goes from -5 to +5. This assessment is in addition to general computing SWIPP whose system produces a sort of index, which measures the fluctuation of users’ opinions on the issues.

This reference teaches SWIPP cumulative average score, the average score of the day, the trend of the question (if rising or falling) and the total number of “swipps” cast.

BUSINESS PLAN The overall index can reel off for places, gender, and you can also see a graph of the evolution in time of these scores. Hermann said that each user can review them whenever you want on a subject, but only the last “SWIPP” counted in the system to avoid distortions and abuses.

Unlike Facebook and Twitter, which despite its success have been slow to find ways to bring economic profitability of their platforms, SWIPP born with a defined business plan competition makes the opinion survey consultants.

Trademarks may engage the services for detailed SWIPP what people think about their products and spot trends, and will have specific tools to manage the volume of public information.

SWIPP creators, however, want their social network beyond the comments and opinions, and serve as a source of knowledge for the user through its link with Freebase, database access and collaborative Google property that feeds, among other websites, Wikipedia.

Looking ahead to February SWIPP prepares special applications to follow the Super Bowl and the Oscars, and in the coming months will release its API protocol to provide third party developers to develop new applications and uses for your system.