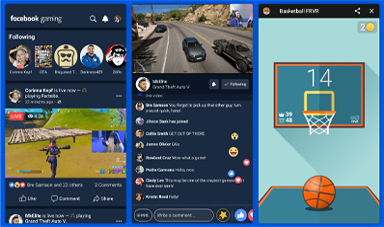 Initially, the date for the Facebook app releasing was for June 2020. But, due to the pandemic crisis and people stuck at home, Facebook has decided to accelerate the launch of his new gaming app by 20th of April 2020.

As strict health measures due to COVID-19, such as social distancing, people spend more of their  time online and streaming gameplay is a great option.  The Facebook gaming app aims to simplify the user experience from amateurs streamers , and ackle accessibility of mobile games.

The new app has casual games and it allows access to gaming communities.Plus, the “Go live” function, allows gamers to upload streams of other phones games on the same device by tab some buttons. (Times, 2020). Once users are alive, streams will show up on their personal pages, making it easy for friends and other viewers to watch. Also, Facebook gives to some of its streamers, monetization by “Stars”,  which are sent by other streamers.  Yet, the company will take a commision from it but the percentage is not yet informed.

However, Facebook gaming is not the leader on the gaming market.  Companies such Twitch, Youtube and Microsoft Mixer are its best competitors.  They offer gaming experience mostly through desktop PC gaming and not through mobile apps. Even, sometimes you need to download third party softwares to hence the experience.

Are you ready to download the Android version of the Facebook Gaming app? According to Mr Sharma, “the mobile experience is more intense than computer viewing”. If you are planning to, a good idea is to check out how good the condition of your Android phone is. You can always trade in your phone for a new model to maximize the mobile experience.