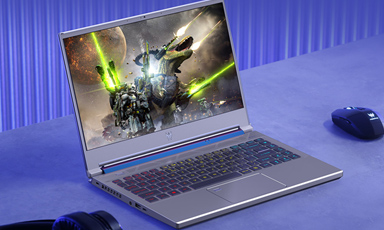 Acer Predator Triton 300 SE is a 2021 release, designed to make a statement.

Acer Predator Triton 300 SE is a stylish looking thin and light gaming laptop. But being a portable model, it offers rather impressive specs, like the latest NVIDIA RTX 3060 graphics chip and the 11th generation Intel Core i7 processor. With their new Triton 300 SE model Acer made an attempt to pack as much power as possible into a relatively small chassis. But if you believe that the gaming laptop must be a little bit more intimidating, at least looks-wise, we suggest checking out our post about the Acer Predator Helios 300 from a few months back.

This laptop is a 14-inch model, which is somewhat unorthodox for gaming units. In fact, Predator Triton 300 SE is the first of the line to feature a smaller screen, as well as the RTX 30-series graphics (RTX 3060). But smaller does not necessarily mean less powerful. The laptop sports a very clean design with silver textured finishes and a holographic logo. Laptop’s minimal yet sturdy appearance makes total sense though, considering this is the direction the entire gaming laptops industry is going in right now. Latest gaming units often double as work productivity laptops, and therefore have a wider share of market.

Currently the Acer Predator Triton 300 SE model is offered in a single configuration:

As we can see, in terms of overall appearance, the Predator Triton 300 SE very much mirrors its competitor: Asus Zephyrus ROG G14 gaming laptop. Both are 14-inch laptops with very similar finishes and even costing about the same, although the new Triton 300 SE has better graphics.

A Closer Look at Features

Display: Triton 300 SE comes with a 14-inch 1080p IPS panel, offering 144GHz refresh rate. It offers quite seamless and vivid image quality. Although, for an anti-glare matte panel, the viewing point at an angle gets a bit scrambled. The image looks great if looked at straight on, but you’d need to up the brightness level otherwise. And it would have been OK for average day-to-day use, but most gamers won’t be so forgiving.

Cooling System: Because the model is thin and enclosed in metal chassis, it tends to heat up, as expected. It can heat up to about 90-95 degrees (F) after about 15 minutes of continuous video streaming, and hits 105+ F marks after 15 minutes of playing games. Yet, these numbers are not outrageous for any gaming ultrabook of this class. The model has a dual fan cooling system installed. It allows for a more efficient circulation thanks to the Vortex Flow technology, taking the air in and out through the back heatsink grill openings.

Predator Triton 300 SE is also equipped with a Turbo button, which sends fans into overdrive.

Keyboard and trackpad: The Acer Predator Triton 300 SE laptop has a rather comfortable, but average keyboard layout with three-zone backlight keys that can be customized. Because it is a 14-inch model, it doesn’t have a full-size numeric layout.

The glass multi-touch touchpad has a Fingerprint reader built in, however, some users report that it only works every other time, so not quite usable as it is. Otherwise, it is rather responsive, and the glass surface allows for a smooth gliding and accurate multi-gestures.

Considering that the RTX 3060 is not the most powerful video card of the line, the Predator Triton 300 holds up pretty well during gaming, averaging at about 60 frames per second (FPS) at standard settings, while playing AAA title games.

For example, most casual gamers find that medium settings are enough to get even 80 to a 100 FPS while playing Battlefield V in a single-user mode. And if you are willing to spend some time to optimize and adjust your settings, you can probably score even higher.

The battery yield on the Predator Triton 300 SE is quite decent, as for a gaming laptop that is. With that said, you probably won’t get a full work day out of a single charge but, if you reduce your screen brightness, and close idling apps and programs, you can get up to 6 hours of total runtime. The model has a 60Wh li-ion battery pack installed and Acer is claiming it yields a solid 10 hours. But users report that they cannot get nowhere near close to that marker, no matter how light the usage is. So, if you are planning to take the laptop with you for a day, it would make sense to grab a charger, too.

Because Acer Predator Triton 300 SE is a very recent model, we do not have an accurate reselling estimate of a used one as of yet. But if you have any other Acer laptop you are looking to get rid of, we can help you there. You can get a dollar offer in real time in a matter of minutes and checkout online, should you choose to do an Acer trade in with us. We will even pay for shipping! And if you happen to change your mind, we’ll send it back to you with no questions asked.

All in all, the Acer Predator Triton 300 SE is a decent mid-range gaming laptop. It looks great, it is rather portable and lightweight, which means it can double as a work computer. And at the $1450 price point, the model is definitely the one of the more affordable ones in its class.