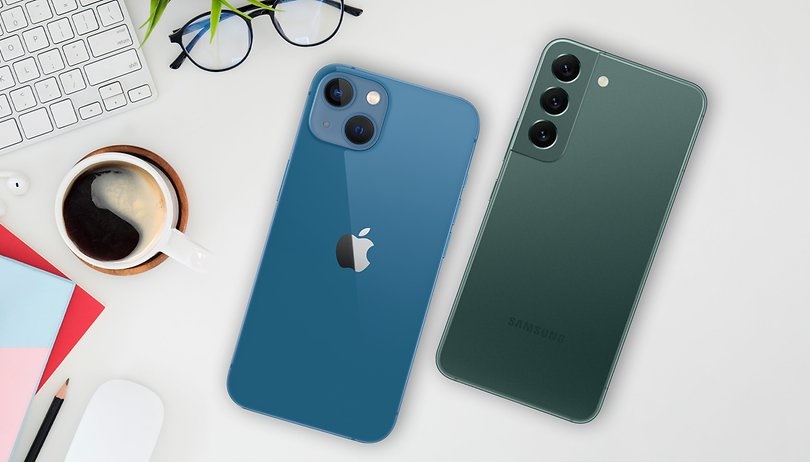 It is only fitting to hold the iPhone 13 vs Galaxy S22 matchup as both flagship smartphones dominate the market right now. Furthermore, many users will be surprised to discover that these devices have many things in common. Besides, both brands made a lot of enhancements to their most recent flagships. On the one hand, the Apple iPhone 13 shows off an improved battery life and increased processing power. In contrast, the Samsung Galaxy S22 boosted its main camera, particularly the telephoto lens. S22 also has the brightest display among smartphones. As you may have guessed, the contest between these two is tight!

So, let’s explore all iPhone 13 vs Galaxy S22 differences and similarities, however marginal those can be.

Looks-wise, the iPhone 13 isn’t much of a departure from its earlier iPhone 12 version. But to be fair, no one really expected a drastic makeover, although many wished for it. And the same can be said for the Samsung Galaxy S22. However, a few things must be noted here.

For one, Samsung is putting a lot of effort into shifting toward making eco-friendly electronics, incorporating ocean-bound plastics, old finish nets, and other recycled materials into Galaxy S22 production. It also feels more durable than iPhone 13, thanks to the Gorilla Glass Victus, which adds some toughness. When buying an iPhone, make sure to get the case with it right away, as it is more fragile.

As for color options, the iPhone 13 is available in White, Pink, Midnight (black), Blue, and (PRODUCT)Red. Samsung, however, has fewer choices: Phantom White, Phantom Black, Green, and Pink Gold.

The Battle of Displays

The Samsung Galaxy S22 phone has a slightly bigger 6.2-inch display. But the iPhone is right behind it, measuring 6.1-inch diagonally. Still, the S22 feels and looks all-screen. Furthermore, it has a higher brightness level: 1,300 nits, while the iPhone 13 has only 795 nits. Yet, both smartphones capture the same 100% of the sRGB color spectrum.

It’s no secret that Apple iPhone models historically have the best cameras. And the iPhone 13 features an advanced dual-camera system and three powerful cameras, paired with a larger main sensor and a 12MP camera for its wide and ultrawide lenses.

The Galaxy S22 got an improved ultrawide angle camera with a wider field of view compared to the S21 models. It also has a 3x optical zoom and features a telephoto lens, which is something iPhone 13 doesn’t have. The latter makes the Samsung Galaxy S22 slightly stand out from the crowd.

The Samsung Galaxy S22 comes with the Snapdragon 8 Gen 1 CPU, which lags behind Apple’s new A15 Bionic chip. However, both phones feature solid 5G support, and the S22 has a better modem. While most average smartphone users won’t notice a difference in overall speed, the optimization on the Apple iPhone 13 and its smooth performance has won many over.

The battery on the Samsung Galaxy S22 shrunk to 3700mAh (from 4090mAh on the S21 model). On the contrary, Apple boosted the size of the batteries on the iPhone 13 line and thus, improved the total yield. And as far as charging speed goes, the Galaxy S22 supports 25W, whereas iPhone uses a 20W power adapter. A 25W charger is about 25% faster, and Apple plans to make it available for their iPhone 13 models.

We must agree that these devices are just beautiful, offering an attractive design and a solid performance. But there are marginal differences. For example, the Galaxy S22 has a larger and brighter display and was rightfully named one of the best Galaxy smartphones of 2022. However, its rival wins this Galaxy S22 vs iPhone 13 battle for overall performance. Plus, the iPhone 13 takes fantastic photos and outperforms every other smartphone available today. Finally, iPhones hold better resale value, so you can always sell your used iPhone for cash if you want to upgrade or switch things up.