Microsoft launched the "war" against Google

Microsoft launched the “war” against Google 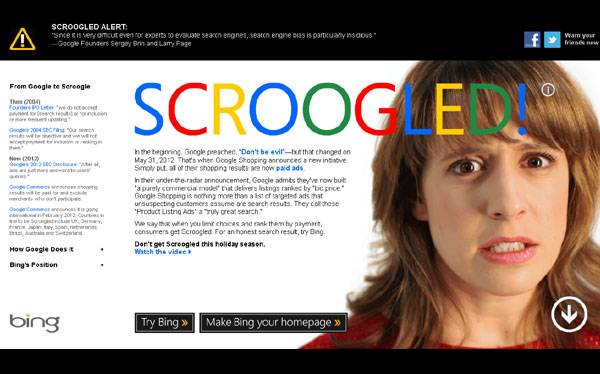 Microsoft launched a campaign against Google accusing the search engine of being guided to their advantage, in order to gain more traffic to its own search engine Bing.

The attack began on Wednesday with a marketing campaign focused on how Google handles the part of your search engine results dedicated to purchasing items. Traders should pay Google for your products listed in the shopping section.

In its latest ads, Microsoft Corp. maintains that this new policy of Google Inc. violates the commitment of this company to provide the most reliable results on the Internet, even if it means sacrificing revenue. To emphasize his point, Microsoft warns consumers that they risk being misled if they rely on the Google search service for your purchases.

SCROOGLED
The message will be broadcast on television on NBC and CNN, as well as ads in “The New York Times”, “The Wall Street Journal” and “The Washington Post”. The campaign will also be posted on billboards and on the Internet from a new Web site Scroogled.com. The site’s name refers to a well-known in the English-speaking world, Ebenezer Scrooge, main character of a novel by Charles Dickens, a miser who despises Christmas and all that makes people happy.

The campaign presumably stoke an intense rivalry between two of the best known technology companies and powerful in the world.

The search engine Google dominates Internet and Bing is a distant second. Programs of Microsoft Office and Windows are integral to personal computers, but Google has reduced the importance of these programs and laptops with the success of the services based on the network and its Android operating system for smartphones and tablets.

HOW IT WORKS TAB GOOGLE SHOPPING
Google still does not require Web sites pay to be included in the main database. This is the index that provides the results of the search engine.

A search for a particular product, such as computers, anyway include the results of merchants who have not paid for the privilege of being included.

But all who click on a tab at the top looking for specific results in the shopping section will only see paying merchants.

Google says that charging fees is one way to encourage business to provide complete and accurate information about what they sell.