What Do You Need To Build A Gaming PC?

Most tech-savvy prefer to build their own gaming pc for several reasons. 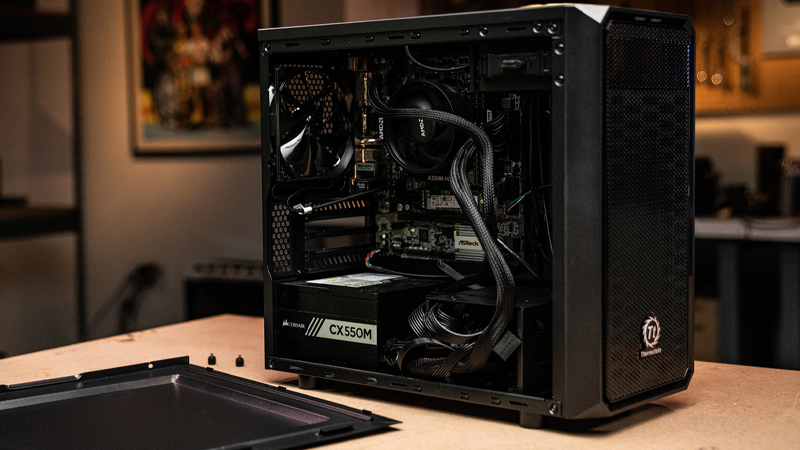 What Do You Need To Build A Gaming PC?

Most tech-savvy prefer to build their own gaming PC for several reasons.

Most tech-savvy prefer to build their own gaming pc for several reasons, but not only for them. The truth is that anyone can build its own computer. The idea of creating your own gaming pc may be appalling to some extent to people that have never made one in their life, but it’s not that complicated as it looks.

In addition, building your own gaming PC saves you some cash and you will learn a lot from the components and pieces that go into the computer. For instance, you will be more familiarized with computer parts like motherboards, GPU,CPU, operating systems and other components which have important functions on the computer.

Here we are going to disclose what you need to build a gaming PC. Starting with the things you need to take into account before jumping into PC- building; the components you need; the importance of those components; and how to choose the right operating system and the accessories.

Things To Consider Before To Build A Gaming PC

Before building a PC ,you need to make clear your needs in relation with your budget. Depending on your budget and needs, you will buy your components needed to make your own gaming PC.  Also, you need to take into account what type of games are you going to play on your PC to pay more for a good CPU and GPU for example.

Price budget can change according to your needs and framerates, but you can start from at least $ 300 to $1000 or even more.  For instance, an entry level PC build, you will need at least a $300 budget for the core parts and this wouldn’t be suitable for cutting-edge games like Monster Hunter: World or Doom Eternal.

If you don’t care about frame rates you can find from $500 to build a gaming PC. It will have similar performance to consoles but you will play in 4K. Then, from a budget around $700- $800, you can get a more well-equipement PC gaming build for modern titles and be able to get into some Virtual Reality gaming.

Furthermore, if you are a professional gamer, or perhaps you want to become one, this is where you invest in building your gaming PC around $1000 or more. You pay for a good CPU enough to stream and render your games on a daily basis.

What Do You Need to Build A Gaming PC?

When building a gaming pc, you need to make sure all the parts are compatible with one another and are balanced. Here’s a list of the components you will need to build a gaming pc:

CPU is also the processor which is the engine of your computer. In other words, it’s essentially like the “brain” of your PC. The Central Processing Unit is one of the most important components on gaming performance and content creation. Furthermore, you need to note three things that are crucial about the processor and these are the clock,the speed,the cores and the threads.

Here we are going to disclose these three parts:

The motherboard also known as MOBO is what all of your components will attach to. It’s where all the information will pass through and distributes power to other components. It has its own BIO S which is an operating system that facilitates communication. Nowadays, some modern motherboards handle wired internet connection, audio, and even Wi-Fi, Bluetooth connections and USB ports.

Now that you have cleared the idea of a motherboard and CPU, you need to choose a compatible motherboard to build a gaming PC. There are two types of categories of MOBO’s which are low-end and high-end motherboards. The main difference between both is that the high-end is the overclocking capabilities. To overclock your Central Processing Unit with Intel CPU’s you will need K-series CPU and Z-series motherboard; with AMD CPUs, B- or X-series motherboards are needed- most of the AMD CPU are overclockable.

After this, you need to choose your motherboard and it’s corresponding case size.The type of case you are going to get also determines the size of motherboard you can use.

The cases come in different sizes like the motherboards, thus need to have the correct sized board for case. There are the ITX,  ATX, MAXT sizes for instance. The ATX has bigger and smaller motherboards variants like eATX bigger and mini ITX which is the smallest.

However, the smallest sizes you choose, the less RAM and PCIe slots you have. We recommend you to get a medium of MATX or ATX for a compatible case. Furthermore, you can either buy from well-known manufacturers such as Gigabyte, ASUS, MSI,EVGA and ASRock.

The graphics processing Unit is the one that impacts your gaming performance. The GPU works by taking information and rendering the graphics that you are seeing at the moment you are gaming. The GPU needs a CPU in order to function. Moreover, if you are willing to build a gaming PC on your own, you have to note that VRAM (video RAM)  plays a key role in performance when loading image quality on games. To mention an example, rendering  games at 1080p resolution is different from rendering a game at 4k resolution, which needs more graphic memory.

You can opt to use a 4GB for a 1080p gaming or any other from the following list:

The RAM stores content, needed variables and it’s faster. At gaming, the RAM is key because the game is loaded into it. Normally, bigger and faster RAM is preferred because it improves the gaming experience and faster loading times.

What Factors Need To Look At RAM?

You need to look for quantity, the more RAM you have the better your system will manage multiple applications from modern games.

When you build a gaming PC, you have two types of storage to choose: a traditional, spinning hard drive or the solid-state drive.  The SSD has no moving parts and it’s good in quality; and the HDD can be used to store media and is more expensive according to GB storage.

PSU takes power from a standard outlet and routes it to all its components for instance the GPU, motherboard and more. We recommend you to get one from a well-known manufacturer such as SeaSonic for instance. In addition, make sure that it has a 80+ rating to efficiency, because it will consume less power.

You will need a case to put all the components in that we mentioned above, but you need to select a size corresponding to your motherboard: ATX, MATX or ITX.

Before getting one, you will need to check that your case has space for the GPU. For instance, ATX and MATX cases have space to fit even a big modern GPUs, but the ITX case is less likely to have space for large cards.

A cooling system prevents overheating of your CPUs and most of the cases come with it’s own cooling setups. In spite of that, you need to go for a case with enough space for an adequate cooling set up,like two fans; a case with space for a water-cooling setup; and a case that supports modern features such as USB3 headers.

Once you have built your own gaming pc with all the components that we have mentioned above, you will need an operating system, mouse, keywords and monitor to complete your DIY pc.

Ready to build a gaming PC on your own?  Hope this article helps you to DIY your own gaming PC. The great thing about doing it by yourself, is that you ended up as an expert in the internal parts of a computer and you get free choice to select what you think is best for your needs.  Last but not least, if you have any used PC or other gadget, you can laptop trade in for cash to pay the funds to build your pc.