This desktop is equipped with the powerful AMD components. 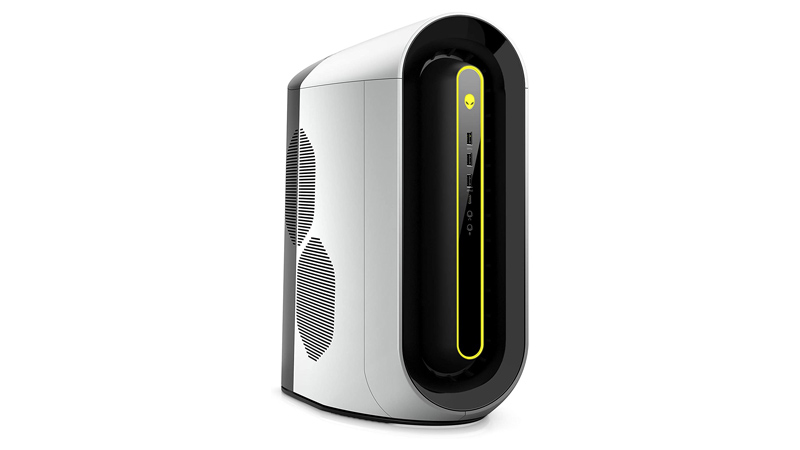 This desktop is equipped with powerful high-end AMD components.

Alienware PC’s are well worth the price tag due to their impressive gaming and work performance. On the latest CES 2021, Dell announced quite a few upgrades for their desktop gaming line, the Alienware Aurora R10 Ryzen Edition.

The latest version of Aurora R10 packs an AMD’s Ryzen 5000 CPU’s and up to the 16-core Ryzen 95950X with options for graphics, such as Nvidia RTX 3000 or AMD Radeon RX 6800 XT GPU’s. A decent performance is guaranteed with this powerful machine. As well, Dell announced updates for its famous laptop models Alienware m15 and m17. Below, we spotlight a few of the newest Aurora Ryzen R10 2021 edition features.

The Aurora desktop line is like the high-end long-standing tower from Dell. It’s design is stunning yet elegant, with a glass panel that let visiblethe RGB lightning. Plus, all Aurora’s models offers the latest component from AMD and Intel processors. What’s great about the Aurora lineup, is the several options available to customize your gaming desktop without compromising the performance. Whats more, you’ll find different prices for all type of budgets, depending what type of games you want to play.

Certainly, Alienware is putting more emphasis on content creation and live streaming, in addition to gaming. The latest Alienware Aurora R10 Ryzen Edition is a gaming PC powered with the new AMD Ryzen 5000 series processors with up to 16 cores. These powerful chipsets, enables gamers and creators, to push the multi-core beast to its maximum for a next level performance, when gaming or working on creative productions.

About graphics of the Aurora R10, users can get an AMD Radeon RX 6800 XT GPU or Nvidia GeForce RTX 30-series graphic card, to run almost any game at its highest settings and get 4K frame rate resolution. If you configured with the higher components, you can expect increased multitasking and smooth live streaming without problems. For the design, the Aurora R10 is built to enable users to easily upgrade the machine with its tool-less chassis. For example, gamers can upgrade the memory, hard drive and other things.

According to Dell, this gaming desktop has twice the memory of previous versions of the system. The Alienware Aurora R10 Ryzen edition supports up to 128GB RAM in a dual channel (2x64GB) of Hyper X Fury DDR4-3400 memory. About storage, the Aurora R10 has several options up to a 2 TB 7200 RPM 2.50-inch HDD, and up to 2TB PCIe NVMe SSD. Furthermore, the new Aurora R10 features a vapor chamber with an innovative airflow design which makes heat dissipate.

What’s great is that this model gives the chance to users to pre-built a powerful gaming PC with the latest Ryzen 5000 series CPU, from Ryzen 5 5600X up to 16-core/32 Ryzen 9 5950X, for a starting price of $1,079.99 at Dell website. Also, you can select between two colors for the Aurora R10 Ryzen edition, which are the Lunar Light and the Dark Side Moon.

How Much Is Alienware Aurora Worth?

If you have older generations of any Alienware Aurora lineup that you are planning to sell to get extra cash for you or to pay part of the funds for the new Aurora R10- Gadget Salvation is the most convenient and quickest solution for that. Here are some examples of what you can expect to receive in cash via PayPal, Venmo, Zelle or Bank Transfer.

In conclusion, Dell Alienware Aurora R10 is an easily upgradable gaming desktop that offers an amazing performance experience, be it gaming, creating, streaming or recording. It packs the newest Ryzen processors line paired with the flagship NVIDIA RTX 3000 series graphic cards, pleasing even the pickiest of users. Did we convince you to upgrade? If so, you can earn some extra cash towards the new purchase by selling old computers or any other gadgets for a top value at Gadget Salvation.