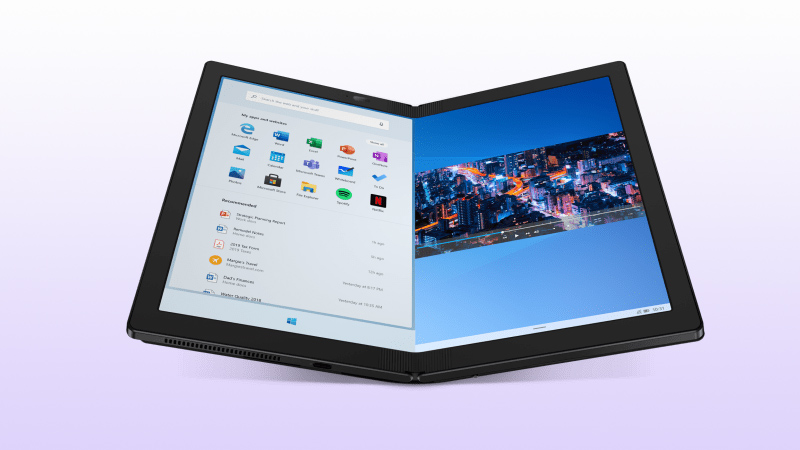 A foldable laptop sounds like something one would use to describe what the future would look like, along with flying cars and teleportation. However, the future is closer than we think. Last year, Lenovo introduced ThinkPad X1 Fold, the world’s first foldable laptop. The device is certainly beyond futuristic, with a sleek design and a beautiful foldable display. Lenovo has successfully attempted an ambitious task, yet there’s still room for improvement since this is the very first iteration. Learn more about this laptop in our overview below. Also, take a look at our compilation of the best dual screen laptops for 2021.

The most expensive model costs $3,100 and is equipped with the Intel Core i5-L16G7 processor, 8GB RAM, and 1TB SSD. It also features Bluetooth mini keyboard and Lenovo Mod Pen for increased efficiency.

There are several pricing options in between with varied specifications. Also, shoppers can build their own ThinkPad X1 Fold and customize the features to suit their individual needs. The customizable option starts at $2,500. Lenovo often holds promotional activities for its products, so keep an eye on discounts and deals before purchasing.

To call the design of the ThinkPad X1 Fold unconventional and futuristic is an understatement. This is the first laptop of its kind, so it’s also hard to compare it with other devices. When closed, the X1 Fold looks exactly like a book. When unfolded, you can’t see a crease down the middle at all with the screen on. If you push pretty hard in the center of the device, then you might feel it. The crease is certainly much less obvious than other folding-screen devices.

The ThinkPad X1 Fold has a very limited selection of ports. There are only two USB Type-C 3.2 connections along the top and side of the display. There is also a Nano SIM slot for a network service provider to enable 5G/LTE connectivity. It’s worth noting that there is no headphone jack. So, if you plan on using headphones, you need to use a Bluetooth connection. This could be troublesome in places with limited or no coverage, such as airplanes.

If you purchase the model that comes with a keyboard, you might notice that it’s quite tightly spaced and limited. However, that should be expected considering the overall dimensions of the laptop. Thanks to Bluetooth connectivity, any Bluetooth-capable keyboard can be used with the ThinkPad X1 Fold. It just won’t be able to dock like the Mini Keyboard would. If you’re getting the X1 without the keyboard, there is a virtual keyboard with swipe-typing functionality.

The X1 Fold is equipped with the Intel’s Core i5 hybrid processor, which is a lower-power chip than the regular Core i5 found in most laptops. However, it works surprisingly well and handles most tasks with ease. Lenovo promises up to 8.5 hours of battery life, though the actual number will depend on many factors, including software use, wireless functionality, power management settings, and screen brightness.

How Much is ThinkPad Laptop Worth?

If you currently own a Lenovo laptop and consider selling it for cash to offset the cost of the ThinkPad X1 Fold, Gadget Salvation is one of the best platforms for that. Here are some examples of what you can received based on your device and model. Lenovo trade in with Gadget Salvation and get paid in cash via PayPal,Venmo, Check or Bank Transfer.

The ThinkPad X1 Fold is an impressive piece of technology, and if you’re a die-hard electronics enthusiast who’s always on the lookout for the newest tech innovations no matter the cost – this laptop is definitely for you. This device is incredibly portable, has a beautiful screen, and looks straight out of a futuristic Sci-Fi movie.