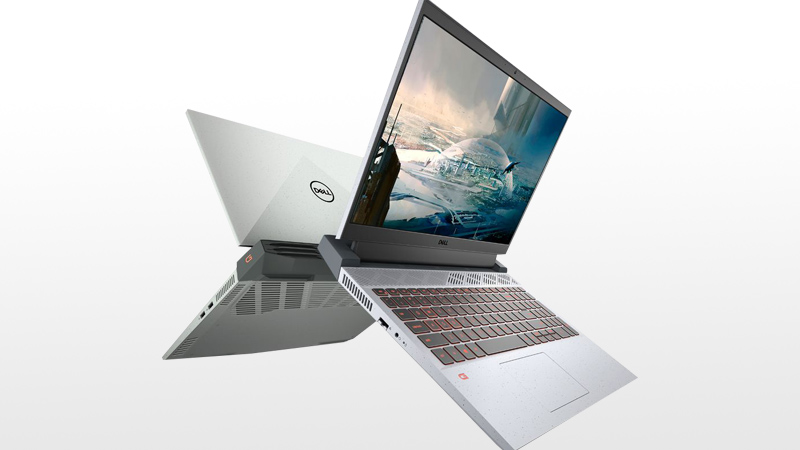 Dell has rehauled its G15 gaming line to include AMD Ryzen processors and NVIDIA GeForce RTX 30-series mobile graphics. Besides, the newly updated G15 gaming laptop features an even sturdier design, has impressive hardware components, and offers decent battery life, which is always a compromise with portable gaming.

The latest 5515 G15 edition comes in the following hardware configurations:

We should note that Dell also added the latest 11th generation Intel Core i5 and i7 processors to their G15 gaming line. The model number for the latest Intel-based G15 series is 5511.

The Dell G15 5515 gaming laptop model features a solid premium design. Its Phantom Grey or Spectre Green chassis finishes are robust and easy to maintain. In addition, the laptop has a sleek and minimal look and could easily pass for a mobile workstation. Yet, compared to the MSI GS75 Stealth 10SGS 17.3-inch gaming laptop, for example, it is not as thin and light. The Dell G15 5515 measures 1.06-inch (H) x 14.06-inch (W) x 10.74-inch (D) and weighs 5.66 lbs. And, as you can imagine, it looks a little bit more intimidating. The only pop of color you find is the orange G logo on the right side of the laptop.

As for the display, all Dell G15 5515 configurations come with 15.6-inch FHD narrow-border screens. And in regards to refresh rates and brightness, you get the following options:

All screens are WVA anti-glare, with LED-backlit. Unfortunately, no touchscreen model is available at this time.

The G15 display has an impressive contrast ratio, which means you will get plenty of depth, but it doesn’t render a wide range of colors. On the other hand, the color temperature of 6352K is sufficient so that images won’t look oversaturated or faint.

Finally, on the left side, you have:

Overall, it is a decent port selection, but we think that Dell could throw a micro-SD slot in the mix. The security-cable slot is also not supported.

Dell G15 keyboard is incredibly responsive, making it ideal for gaming. It is a full-size keyboard, meaning it has a numeric pad, backlit provides visibility in low-light settings. 4-zone RBG backlit is optional.

The trackpad, however, is underwhelming due to its relatively small size. Plus, the corners of the pad require an extra force to register right or left clicks–definitely something to improve on.

All models come with Windows 10 Home by default. However, you can upgrade to a Professional version for an extra $60.00 at the time of purchase. All buyers can also get Windows 11 at no cost once it becomes available.

Overall, the Dell G15 delivers a solid gaming speed and a good application pace, so you won’t have any problems playing video games, even the AAA titles. In addition, thanks to the NVIDIA RTX 30-series graphics, it runs at a power level of 125W, its most optimal setting, especially for the RTX 3060 configuration. And if you want to play less demanding eSports games like Fortnite or League of Legends on a 120Hz panel, the Dell G15 can tackle that, too.

As for the battery, it is one of the most long-lasting ones among gaming laptops. So, for example, if you were to use your G15 for work, you could easily get solid nine hours, which is unheard of for any gaming computer. And when it comes to actual gaming, the battery lasts just under two hours, and any laptop gamer knows it is sufficient. Because of that, we can easily say that the Dell G15 outperforms Lenovo and MSI gaming laptops by a mile.

Generally, in terms of performance, the new Dell G15 Ryzen Edition is quite a step up compared to the Dell G5 15 5590 we reviewed earlier this year. Impressive what AMD Ryzen processors and NVIDIA GeForce RTX 30-series graphics can do to improve the gaming experience!

Indeed, the new and improved Dell G15 5515 is an ideal choice for a gaming laptop, thanks to the RTX 30-series GPUs and the latest AMD Ryzen processors. Besides, it comes with a relatively moderate price tag, specs considered. Paired with a robust design, solid performance, and excellent battery life, we think The Dell G15 is a no-brainer for most laptop gamers. Lastly, if you are interested in upgrading but do not know what to do with your older pre-owned computer, we at Gadget Salvation might have a solution. Did you know you could sell your used laptop for cash, skipping all the hassles associated with posting an item for sale on a marketplace? Visit our How it Works page for more details.