iPhone vs Samsung Galaxy: is one better than another? 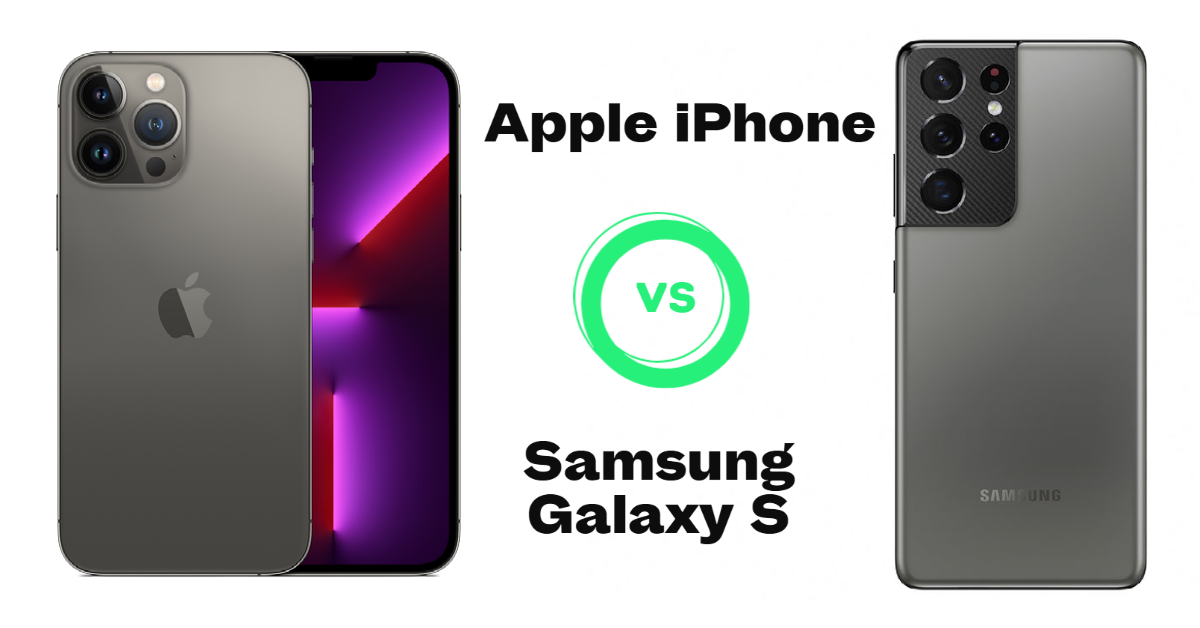 If you are looking to fight the iPhone vs Samsung Galaxy battle, then pitch two that are fairly evenly matched. In this day and age, the two titans would be the Apple iPhone 13 Pro Max vs Samsung Galaxy S21 Ultra. After testing both, it is clearly obvious that neither are bad devices. This article is not about putting down one device while elevating another because they are both brilliant flagship phones. If anything, this article is a staring contest between two champions, highlighting only when the other blinks.

Both are dust and water-resistant. The Apple iPhone 13 Pro Max is made of stainless steel and glass, where the Samsung Galaxy S21 Ultra is made of aluminum and glass. Given that these are not heavy devices, these don’t really matter. The aluminum is a little lighter, and the steel is a little more robust, but on the whole, these factors make little difference.

The days of the tiniest phone, slimmest phone, the most lightweight phone are mostly over. People are not running out to buy the thinnest or lightest anymore. Today, we look for features and performance. Nevertheless, it is impressive that the Galaxy manages to be bigger and a little lighter; probably due to the fact that aluminum is lighter than stainless steel.

In the case of this iPhone vs Samsung Galaxy battle, both come out as equally silly. It seems that both Samsung and Apple are going down the route of men’s razors. We now have men’s razors called ultra-power stealth max diamond, and somehow this theme is recurring in the tech world well.

How is one to know how the designation “Max,” “Ultra,” or “Pro” is supposed to signify differences or changes? The names give no indication as to the power or purpose of the device. They are simply marketing keywords that are clickable and so are tagged onto the end of the device name. Both devices lose points for continuing this stupid trend.

Again, Samsung seems to come out on top in this case, but again, both screens are overkill in regards to quality, so there is little to complain about.

The Apple iPhone 13 line is powered by the A15 Bionic six-core chip, and the Samsung Galaxy S21 Ultra has an Exynos octa-core or Snapdragon 888 processor. This means that both Apple and Samsung are powerful devices, but Samsung wins again if you compare each side-by-side.

Samsung does seem to win out in this case too, but it is not a perfect victory.

Through daily use, you will find that Apple manages background activities a little better. This means that active users of each device will actually find that the Apple battery seems to last longer.

Again, if you just had two devices with no apps and left them running all day, then they would cease functioning at around the same time. But, if used with several apps, especially with apps running over apps, then the Apple battery will last longer.

Well, the iPhone is a clear winner here. It is no secret that Apple devices beat just about any other brand in terms of holding the reselling value over time, and phones are no exception. But because both the Galaxy S21 Ultra and iPhone 13 Pro Max are fairly new phones, let’s take a look at the current prices of older preowned smartphone models:

In Conclusion – Which Phone Wins the Day?

However, this is unlikely to affect most Apple users, as they are born of a very zealous fan base that almost rivals that of Nintendo. So with that said, the Apple device isn’t a bad device by any stretch of the imagination, it just doesn’t win out over Samsung.

However, if Apple is forced in the future to adopt the universal USB-C connection, rather than coming up with its own connector every time it releases a device, then perhaps Apple’s appeal will stretch out over to a larger crowd. Remember that this was a battle of the titans, not a kitten fight in a strawberry bowl. Both are fine options if you are looking for a good mobile device.